Keeping ourselves safe online is a task that keeps getting harder. As the threats we face constantly evolve, mutate, and multiply, it becomes harder to recognize which programs can deal with them most efficiently. Threats like ransomware and massive breaches like Wannacry can leave us swimming in a sea of complex jargon when all we really want is two simple words. Safe and secure. Fortunately, there are specialist labs out there that put the top-ranking antivirus programs out there through rigorous testing so that it is easier for us to choose the right antivirus program for our needs.

Security Test Lab AV-Comparatives is a leading independent antivirus testing institution and is known for its thorough testing processes. Each year AV-Comparatives puts 18 Windows compatible antivirus programs through various stressful situations designed to test their ability to “protect against real-world Internet threats, identify thousands of recent malicious programs, provide protection without slowing down the PC, and remove malware that had already infected a PC.”

The 7 security tips you really need to know

AV-Comparatives offers ratings for individual antivirus programs with those achieving advance scores across all categories receiving a “Top Rated Product” classification. The testing lab was happy to name a number of programs as Top Rated including the excellent offering from AVG. It is clear from the AV-Comparatives results, however, that one product stands out as 2018’s best antivirus program.

According to AV-Comparatives, the “Product of the Year” award is given to the antivirus product that consistently performs the best throughout the year. In this respect Avast was able to take home the prize as it performed well across the board, always scoring highly and often beating the competition in individual tests. 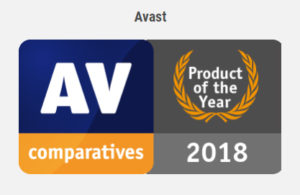 As well as scoring an Advanced+ score in all six tests, Avast won the Gold Award for Malware Protection, joint Silver for Malware Removal, and the Bronze Award on the Performance Test, which looked at how the antivirus programs work on lower-spec machines. On top of this Avast was also praised for its modern redesign and touch-friendly interface.

So does all this show that Avast is the right choice for you? The answer is yes and no. In its 2018 testing report, AV-Comparatives offers advice on choosing the right antivirus program. “There is no such thing as the perfect security program, or the best one for all needs and every user. Being recognized as ‘Product of the Year’ does not mean that a program is the ‘best’ in all cases and for everyone: it only means that its overall performance in our tests throughout the year was consistent and unbeaten.”

This means that your own online behavior will dictate which antivirus program is right for you. Even with this being the case, however, these tests give you clear evidence to match alongside your online habits. If you use the internet to download a lot of files and programs, then Malware Protection should be important to you. If you’re running an old or slow PC, you’ll want a program that scored highly on the performance tests. If, however, you’re a casual user, you’ll want a strong showing across the board and won’t focus on a certain aspect of online security. If that is you, you’re in luck because this year’s top-rated Product for AV-Comparatives is free.

Win an Avast Premium Antivirus license and a multi-device VPN!!